William Henry “Bill” Gates (born October 28, 1955) is the founder of a software company named Microsoft Corporation. He’s presently the chairman of Microsoft and the largest individual shareholder with over 8 percent of the common stock. 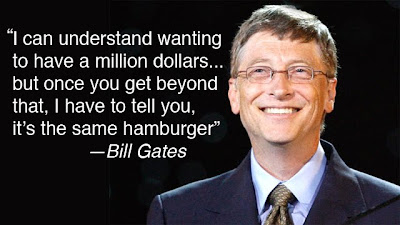 Bill Gates has consistently held the position of the world richest man more than 12 consecutive years. Bill Gates is also regarded as an entrepreneurs, philanthropist and author.

Below are some famous quotes quoted by Bill Gates.

‘If geek means you’re willing to study things, and if you think science and engineering matter, I plead guilty. If your culture doesn’t like geeks, you are in real trouble.’

‘Intellectual property has the shelf life of a banana.’

‘It’s fine to celebrate success but it is more important to heed the lessons of failure.’

‘When you want to do your homework, fill out your tax return, or see all the choices for a trip you want to take, you need a full-size screen.’

‘Whether it’s Google or Apple or free software, we’ve got some fantastic competitors and it keeps us on our toes.’

‘I’m a great believer that any tool that enhances communication has profound effects in terms of how people can learn from each other, and how they can achieve the kind of freedoms that they’re interested in.’

‘I’m sorry that we have to have a Washington presence. We thrived during our first 16 years without any of this. I never made a political visit to Washington and we had no people here. It wasn’t on our radar screen. We were just making great software.’

‘Information technology and business are becoming inextricably interwoven. I don’t think anybody can talk meaningfully about one without the talking about the other.’

‘I think it’s fair to say that personal computers have become the most empowering tool we’ve ever created. They’re tools of communication, they’re tools of creativity, and they can be shaped by their user.’

‘Windows 2000 already contains features such as the human discipline component, where the PC can send an electric shock through the keyboard if the human does something that does not please Windows.’

‘You see, antiquated ideas of kindness and generosity are simply bugs that must be programmed out of our world. And these cold, unfeeling machines will show us the way.’

‘Your most unhappy customers are your greatest source of learning.’

‘People always fear change. People feared electricity when it was invented, didn’t they? People feared coal, they feared gas-powered engines… There will always be ignorance, and ignorance leads to fear. But with time, people will come to accept their silicon masters.’

‘If I’d had some set idea of a finish line, don’t you think I would have crossed it years ago?’

“Success is a lousy teacher.It seduces smart people into thinking they can’t lose”

“So it’s an absolute lie that has killed thousands of kids. Because the mothers who heard that lie, many of them didn’t have their kids take either pertussis or measles vaccine, and their children are dead today. And so the people who go and engage in those anti-vaccine efforts — you know, they, they kill children. It’s a very sad thing, because these vaccines are important.”

“DNA is like a computer program but far, far more advanced than any software ever created.”

“We were young, but we had good advice good ideas and lots of enthusiasm.”

For questions or suggestions about Bill Gate’s quotes or would simply like to include another quote from Gates, please feel free to contact us.

Get Books Written by Bill Gates from Amazon