Albert Einstein was born in Ulm, Württemberg, Germany in 1879. The German-born theoretical physicist is regarded as the Father of modern physics for developing the general theory of relativity. During his lifetime, he won many awards and he’s also considered as the most influential physicist of the 20th century. 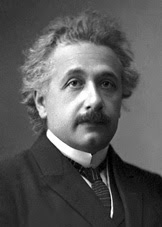 Below are the best collections of Einstein famous quotes he quoted during his lifetime.

“Everything should be made as simple as possible, but not simpler.” – Albert Einstein

“Anyone who has never made a mistake has never tried anything new.” – Albert Einstein

“Reality is merely an illusion, albeit a very persistent one.” – Albert Einstein

“Great spirits have always found violent opposition from mediocrities. The latter cannot understand it when a man does not thoughtlessly submit to hereditary prejudices but honestly and courageously uses his intelligence.” – Albert Einstein

“The intuitive mind is a sacred gift and the rational mind is a faithful servant. We have created a society that honors the servant and has forgotten the gift.” – Albert Einstein

“When forced to summarize the general theory of relativity in one sentence: Time and space and gravitation have no separate existence from matter.” – Albert Einstein

“For every one billion particles of antimatter there were one billion and one particles of matter. And when the mutual annihilation was complete, one billionth remained – and that’s our present universe.” – Albert Einstein

“Science is a wonderful thing if one does not have to earn one’s living at it.” – Albert Einstein

“Gravitation is not responsible for people falling in love.” – Albert Einstein

“The hardest thing in the world to understand is the income tax.” – Albert Einstein

“Only two things are infinite, the universe and human stupidity, and I’m not sure about the former.” – Albert Einstein

“Once you can accept the universe as matter expanding into nothing that is something, wearing stripes with plaid comes easy.” – Albert Einstein

“I maintain that the cosmic religious feeling is the strongest and noblest motive for scientific research.” – Albert Einstein

“God does not play dice with the universe.” – Albert Einstein

“Science without religion is lame, religion without science is blind.” – Albert Einstein

“I cannot conceive of a personal God who would directly influence the actions of individuals, or would directly sit in judgment on creatures of his own creation. I cannot do this in spite of the fact that mechanistic causality has, to a certain extent, been placed in doubt by modern science. [He was speaking of Quantum Mechanics and the breaking down of determinism.] My religiosity consists in a humble admiration of the infinitely superior spirit that reveals itself in the little that we, with our weak and transitory understanding, can comprehend of reality. Morality is of the highest importance — but for us, not for God.” – Albert Einstein ‘The Human Side’, 1954

“Subtle is the Lord, but malicious He is not.” – Albert Einstein

“Strange is our situation here upon this earth. Each of us comes for a short visit, not knowing why, yet sometimes seeming to a divine purpose.” – Albert Einstein

“It has become appallingly obvious that our technology has exceeded our humanity.” – Albert Einstein

“Only a life lived for others is a life worthwhile.” – Albert Einstein

“Peace cannot be achieved through violence, it can only be attained through understanding.” – Albert Einstein

“The value of a man resides in what he gives and not in what he is capable receiving.” – Albert Einstein

“Education is what remains after one has forgotten everything he learned in school.” – Albert Einstein

“Teaching should be such that what is offered is perceived as a valuable gift and not as a hard duty.” – Albert Einstein

“Wisdom is not a product of schooling but of the life-long attempt to acquire it.” – Albert Einstein

When Einstein died on April 18, 1955 he left a piece of writing ending in an unfinished sentence.
These were his last words:

In essence, the conflict that exists today is no more than an old-style struggle for power, once again presented to mankind in semi religious trappings. The difference is that, this time, the development of atomic power has imbued the struggle with a ghostly character; for both parties know and admit that, should the quarrel deteriorate into actual war, mankind is doomed. Despite this knowledge, statesmen in responsible positions on both sides continue to employ the well-known technique of seeking to intimidate and demoralize the opponent by marshaling superior military strength. They do so even though such a policy entails the risk of war and doom. Not one statesman in a position of responsibility has dared to pursue the only course that holds out any promise of peace, the course of supranational security, since for a statesman to follow such a course would be tantamount to political suicide. Political passions, once they have been fanned into flame, exact their victims … Citater fra…

For questions or suggestions about Albert Einstein’s quotes or would simply like to include another quote from Einstein, please feel free to contact us.

Get Albert Einstein Books from Amazon